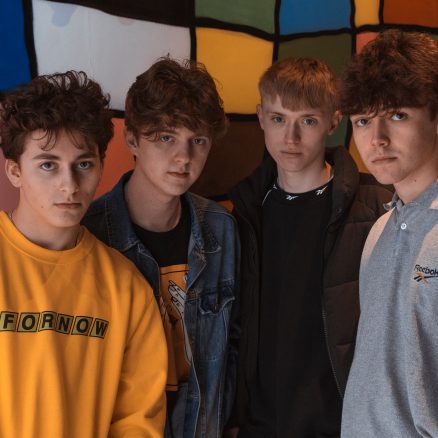 Among The Citizens fast became a hotly-tipped new act from the East of England as they began to establish themselves as one of the most exciting young bands entering the indie/alternative genre within the UK. Having burst onto their local music scene in 2017 the band have played many gigs across East Anglia

Among The Citizens were a 4 piece indie/alternative band based near Peterborough, UK. The band collaboratively created their own distinct sound from a blend of influences such as The Cure and Echo and The Bunnymen with their dreamy, infectious chorus guitar, as well as contemporary artists such as JAWS with their lush and memorable synthesiser/guitar melodies. In more recent years, they enjoyed the west coast pop scene listening to bands such as HUNNY and Bad Suns.

Not only have Among The Citizens excelled in their studio work, they have also honed their set on the live gigging scene. They have enjoyed playing at both the Junction and the Corn Exchange in Cambridge as well as at EPIC Studios and the Arts Centre in Norwich. Across the early months of 2018 they played to 2 sold out venues in their home county of Cambridgeshire, the first for promotion giants ‘This Feeling’ and the second for ‘Green Mind Gigs’. On top of this they also packed out their first show of the year at Mama Liz’s Voodoo Lounge in Stamford supporting Redfaces who played at Community Festival 2017. In June 2018, Among The Citizens also played a gig at the Old Blue Last in Shoreditch, London for Fierce Panda who had invited them to play after watching one of their previous shows. Other acts that they have supported include The Scruff, Blushes and DYGL.

August saw the band support Eliza and the Bear at another sold out show in Cambridge and summer festival appearances included Green Meadows for BBC Introducing Cambridgeshire, VW Whitenoise and Wilkestock for Juicebox Live.

In October 2018 the band embarked on their first UK tour, in association with Born Music Online. It visited cities such as Brighton, London, Sheffield, Leeds and Newcastle for companies that include Disorder, Double Denim Live, Musicians Against The Homeless, Green Mind Gigs and Juicebox Live. They also appeared at that year’s Blogtober Fest for Born Music Online as main support for Feva. Their second EP ‘Pretend To Be In Love’ was released during this month.

2019 saw the band included on the Big in 2019 list published by respected promoters This Feeling in association with Fred Perry Subculture. Their first single release of the year ‘Next Time’ received critical acclaim and was backed up by a Spring UK tour which highlights included opening for Larkins at Norwich Arts Centre. The summer saw the band play showcases in association with Louder Than War at The Great Escape, support Jaws and Easy Life at 110 Above Festival and open for Gengahr at Cambridge Junction. What turned out to be their final single ‘In Your Car’, released in October was produced by Jon Hucks (Spring King/False Heads) and mastered by Mike Cave (Lewis Capaldi/The Charlatans). The end of the year saw the band head out on a headline tour with This Feeling to cities including Nottingham, Birmingham, Manchester and London and then join upcoming artist Casey Lowry on dates in Glasgow, Sheffield and Leicester.

Among The Citizens took varied music influences as the band have a very eclectic interest in music, due to this they collaboratively created their own distinct sound from a blend of bands such as ‘The Cure’ and ‘Echo and The Bunnymen’ with dreamy, infectious chorus guitar, as well as contemporary bands such as ‘JAWS’ with their lush and memorable synthesiser/guitar melodies. Because of this Among The Citizens have created a fresh, youthful sound.

The band broke up in May 2020. Former lead vocalist John Gooding now releases music under the moniker J Western.