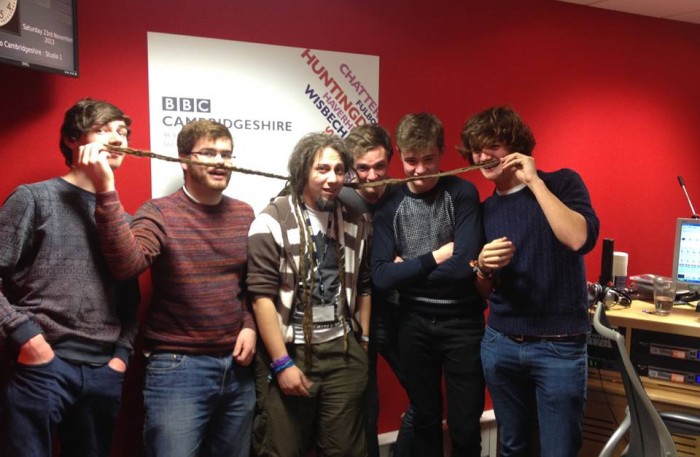 Is it too early to wish readers of this blog a Merry Christmas? Well I won’t be writing another this year so I may as well wish you a Happy New Year whilst I’m at it as well!

November was a fairly busy month for 28 Boulevard who can cite appearing on BBC Introducing Cambridgeshire as their highlight. Lewis LK came back from University for the weekend especially to be involved in an hour long radio show in which the lads played two tracks live and handled themselves very well in the interview. I’m always nervous when I sit in on bands being interviewed by other radio stations because I know exactly what sort of questions they’re going to be asked! Often it’s the same ones they’ve been asked multiple times before but it’s all too easy to fall in to the trap of letting one person be the spokesperson and the rest keeping quiet but this time they shared the responsibility of answering questions pretty equally – apart from Lewis Moon of course, he’ll never speak in an interview.. I gave up on that hope ages ago! I’m pleased to say the whole thing passed off rather successfully although when Tim ‘clumsy clot’ Lloyd Kinnings broke a guitar string and almost broke a chair before they even got on air it wasn’t looking good for a while!

I managed to film what’s turned out to be a pretty good video of part of the session, you can see it here:

In amongst the radio appearance was two gigs which will end up being the bands last two of the year. I’d love to tell you how they got on in Watford at The Flag but being as I arrived with 1 minute of their set to go I don’t think I could give a very accurate account… Still, I made it to Godmanchester’s Black Bull on time to see them the following week and thought they played well – and with a lot of energy and enthusiasm which considering the crowd was pretty small is always encouraging.

The bands main efforts continue to be focused on recording a new EP, the first stage of which will be completed before the end of the year and then it’s the decision on which tracks to include, in what order and which track to film a music video for – and speaking of the video, there are some ideas being banded around at the moment and I think the one which I saw earlier today is a contender to trump the Logistics video (and if you’ve not seen that, check out the Video section of this website).

28 Boulevard’s next gig is at The Junction on 17th January with Goldstar, Forest, From The Sticks and Motor Tapes.

The response to Lost Lungs debut single release ‘Childer Road’ continues to be really positive – the track has now received almost 900 plays on Sound cloud which is excellent. It’s currently in the Cambridge 105 Unsigned Chart and last week was at #1 which is well deserved – to back that up it’s also getting lots of positive feedback from my colleagues who love playing it too. If you want to vote for them this week, check out the Cambridge 105 website’s Unsigned Chart page.

The band were involved with the Bury St Edmunds Christmas Fayre last weekend – busking on the Saturday and closing the music on the Arc stage on the Sunday. It’s great to see the level of support they get from friends and family when they play, this has become more noticeable in recent months and I think it helps the band realise they’re developing and improving – and it also helps to get feedback from different perspectives although it can be awkward when a parent doesn’t agree with me!

It’s exciting times for the band too as they’ve been asked to fill a gap in the next Junction Fiver line up on December 20th alongside some bands I really rate including my good friends Saul, Rob, Christian and Stephen aka Total Emergency who are headlining and playing the Junction for the first time in over 2 years. It’s set to be a great night and I hope Lost Lungs can go there with no pressure and express themselves in front of a new crowd of people – and who knows, maybe win some new fans. It’s their first Cambridge gig – admittedly, it’s a little baptism of fire for it to be at the Junction and not what I was intending in my plan but it was an opportunity not to be missed and it was nice to be asked.

We’ll be spending the winter honing the repertoire of tracks and preparing to record a new EP for release in hopefully the not too distant future.

The Acoustic nights at the Bath House and the Avery have concluded for the year now but I am booking for January and February so if you’re reading this and want to play, get in touch! The nights resume on 9th and 10th January and run fortnightly once again.

I’m looking forward to kicking off a brand new night mainly aimed at Under 18s bands at the Abbey Stadium (home of Cambridge United) from the beginning of February. There is a real shortage of venues for young bands to perform at in Cambridge, especially in the evening so I hope these new monthly nights will be popular.

I’m working in partnership with a promoter in Norwich to put on the first Cambridge gig as part of the ‘Condiment Collective’ at the Portland Arms on 20th February, this will feature a couple of local bands and some travelling bands from Norwich. The idea being that they swap and the Cambridge bands get to play on the bill in Norwich a few weeks later. The model has been successful so far in Norwich and St Albans so hopefully Cambridge will prove to be too.

I’m also working with Slate The Disco for the next NMG Sessions (10) for 27th February which see’s a travelling band from Birmingham (DUMB) headline alongside Treehead, Cathedrals and Cars and Lester J Allen. That’ll be an 8pm start with highlights on Cambridge 105.

Finally, a sneak peak ahead to upcoming Radio sessions..

In summary, it’s been a pretty epic first full year of running Off The Chart Promotions. All the bands I’ve worked with have developed a lot this year and both have plans to make sure that 2014 is even more successful than this year.

I suppose I should end how I begun.. Merry Christmas, Happy New Year & see you in January…