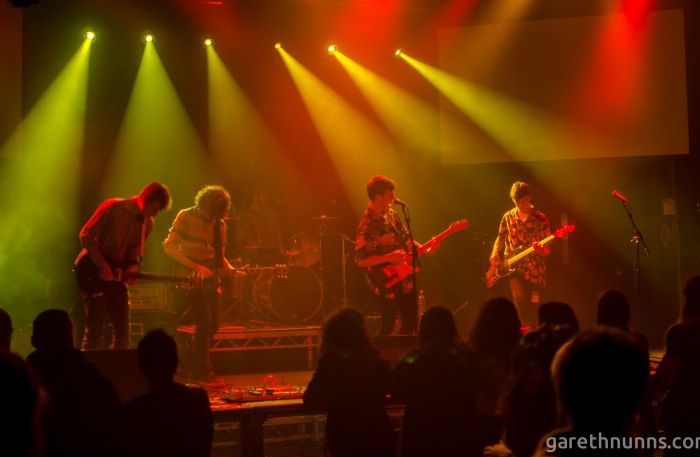 It’s February already so that must mean it’s time to write another installment of the blog and what a lot there is to update you on!

I’ll start as I always do with an update on what our artists have been up to over the past month, beginning with 28 Boulevard who are on course to release some brand new material later this month. In my last blog I announced that the lead single would be titled ‘Electric Feet’ and this is slated for a release during the last week of February, an exact date will be fixed once we’ve had the track back from the lovely people at Philosopher’s Barn for mastering and the music video is finalised. My last blog was written shortly after filming had been completed for the bands new music video, since then it’s been edited behind the scenes but this week I saw a first draft of what it could look like and truth be told I was completely blown away! Because of the nature of the video in terms of there being a lot of ‘post production’ effects added, being there whilst it was being filmed required a lot of imagination as to what the finished article would look like but the video has definitely come alive now and it looks amazing. The video will also be released at the end of this month to compliment the single release.

In March the full EP will follow and over this last month we’ve finalised the EP title and put together some really great artwork, I won’t spoil the surprise and announce the EP title here so you’ll have to keep your eyes peeled to 28 Boulevard’s Facebook page. The EP will be available to download via iTunes and all the usual online stores. I’m really pleased to confirm that we’re also working with Kim Astley-Cooper at Super Cat PR, a London based PR company who specialise in promoting unsigned music releases through the world of the internet and social media. We hope that whilst working with Kim word will be spread about the EP far and wide and the band will get picked up through reviews and articles in loads of online blogs and it will also help the band to establish a larger fan base through reaching people we’d not have done so otherwise.

Talking of articles, in the last month the band were featured in Sound on Sound Magazine in the ‘Mix Rescue’ article written by our good friend from Half Ton Studios, Bugs. Each month Bugs takes a track, re-mixes it and writes an article in technical jargon (I didn’t understand a word!) on all the processes he’s been through to change the track from start to finish. We sent them a copy of ‘Who Are You’ to have a play around with and you can see the resulting article here

Gigs have been a little bit stop start since Christmas, they played as a five piece at the January Junction Fiver night alongside Soft Like Camel, Motor Tapes, From The Sticks and Goldstar. We used the evening to film a new live music video which we’ve yet to decide if we will release or not. Then last Tuesday they played as a four piece at the Portland Arms in a Green Mind Promotions event supporting Nothing But Thieves and The Cogo and then tonight (Friday, 7th Feb) they’re playing a second gig in Norwich at the Bedford Crypt with Loco Motif, Cineclub and Rad Fru.

January is the time of year when bands apply to as many festivals as they can possibly find contact details for and it’s fair to say I’ve been doing a lot of that on behalf of both bands this month. I’m hoping that both can build up a good run of festival appearances across the summer months and the first signs are encouraging with both bands already signed up to one or two at this early stage.

I’m also working on putting together a second tour for 28 Boulevard, this time it’ll be DIY so the process is a lot more difficult as there is a lot of research to do in different venues, artists to share the bill with and a lot of logistical things to keep in mind but the first date has been booked and my job now is to schedule other gigs in locations which compliment it geographically so we’re not running up and down the country for a week. Once more details have been finalised on this then I will post them in a future blog.

28 Boulevard presented their own radio programme last month as part of my Cambridge 105 NMG Takeover initiative where I give over an hour of the airwaves to an artist to come in and pretty much do what they like (within broadcasting rules of course!). 28 Boulevard were the first band to have this opportunity and you can listen back to it again here

Finally, very exciting news! ‘Who Are You’ by 28 Boulevard is to feature somewhere in the background of an episode of ITV’s soap opera Emmerdale this Monday, 10th February. This is quite a unique opportunity for an unsigned band and something that has been in the pipeline for a few months. We’ll be glued to the TV screen on Monday night at 7pm to spot it!

On to Lost Lungs who got back in to gigging again last Friday night in Ipswich at a nice little gig in the centre of town at Number 16 Bar. They’d not played live for 5 weeks and hadn’t practiced all that reguarly during that time either but I was pleased with their accomplished performance and they went down well with the crowd too – who even sung a long to Childer Road.

Equally exciting developments happened for Lost Lungs last week as they were approached to play a support gig at the brilliant Apex venue in Bury St Edmunds. 70s and 80s legend Toyah Wilcox is performing there on 22nd March and the organisers wanted a local young band to support – and it’s Lost Lungs! So the band will play to what will likely be their biggest audience to date in a fantastic opportunity, I hope they grasp it with both bands and give it their all, I’m sure they will. If you’d like tickets you can buy them here

Other upcoming gigs for the band include supporting Tied To The Mast on 15th February at the Hunter Club in Bury and a gig at the Steamboat Tavern in Ipswich on April 11th with more TBA.

Lost Lungs also presented their own NMG Takeover show on Cambridge 105, this was last Wednesday and you can listen to it here

Moving away from our bands and on to live gigs and last Saturday saw the first Under 18s friendly gig night at Cambridge United FC, known as ‘Abbey Rocks’. 6 great artists played to an audience of around 100 people across the evening, thanks to Improvised Beach Party, The Varsity, Friday the 13th, Melody Causton, Shelby Hannah and Meet Me At Dawn for putting on a great first show. The night returns with a line up TBC on Saturday, 5th April.

Some mixed news on the Acoustic night front and regrettably we’ve ended our relationship with the Bath House having run in to some issues with them since the turn of the year. I was forced to cancel the last two events and have decided that rather than mess anyone else around it’s best if we cancel the night altogether for the forseeable future. I’d like to thank the guys at the Bath House for their support of the night over the last 8 months and hope we can bring it back one day.

The Avery is still going strong and new dates for that venue will be released soon, these take place every other Friday night at the venue located opposite Parkers Piece.

I am in talks with a couple of other new venues to start one or two new Acoustic nights soon, once I have more details and if they go ahead I will post more on this.

Tonight at the Avery (Friday, 7th) there are sets from Tom Lumley, Soham De and Pablo Zero. On Friday, 21st February there will be sets from Tim O’Connor, Phil Jackson and From The Sticks.

The first NMG Sessions of 2014 is at the end of this month (27th February) with Birmingham touring band Dumb headlining with Treehead, Cathedrals & Cars and Lester J Allen at the Portland Arms. This gig will not be broadcast on the radio so the only way to see or hear it is to get to the venue itself. Tickets are available here

I also announced the date for the 2014 NMG Awards this week too, we’ll be returning to The Portland Arms on Friday, 17th October. I was looking at moving to a larger venue but unfortunately such is the state of the Cambridge music scene at the moment there are no other larger venues between the size of the Portland and the Junction which are affordable. That said, I hope we’ll pack the Portland out again this year as we did last.

Cambridge 105’s New Music Generator goes strongly, next week I’m looking forward to interviewing The Abstracts who are back on the scene after over a year’s absence. They join my other confirmed guests Too Cool Kid and Afterglow in appearing in the coming weeks with my next NMG Takeover show coming from cheeky chappies Music and Spies. In 5 weeks it will also be the 100th week of the Unsigned Chart so I suppose I ought to be planning something special to mark that landmark occasion!

Well I’ve run out of news to tell you so I’ll end it there. See you in March – or possibly before when I might have an announcement of a new artist joining the OTC Promotions stable.. shhh…