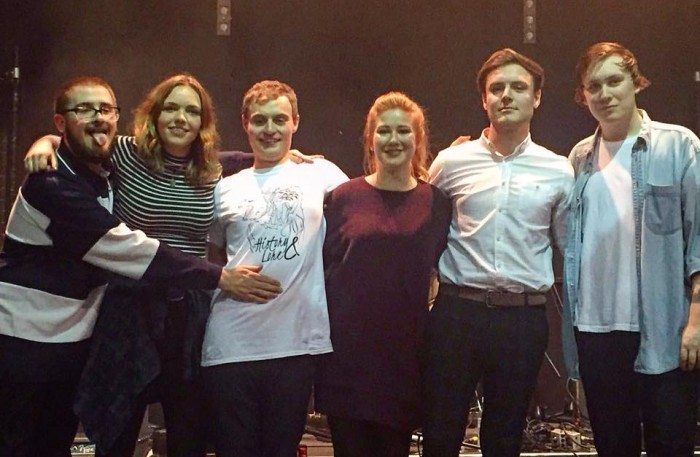 Since September i’ve been in a transition period with some of the bands I’d been working with moving on which opens up opportunities for me to take on new and exciting projects and that’s really the tale of this blog.

In January of last year I expanded the services I offered to bands which weren’t necessarily looking to have every aspect of their band managed by me but needed a helping hand in certain areas, whether that be booking gigs in venues which they had found difficult to contact, helping publicise their music or releases through publicity on radio or printed media or just taking some of the admin work out of their hands and allowing them to concentrate on making great music. It was a year ago that I signed The Abstracts and in that time I’ve helped the band promote their long awaited album release, booked their debut UK tour and handled a lot of their festival applications for this summer and the relationship continues to work well for both parties.

With this in mind I am expanding this service and opening it up to more bands for 2016. When I decided I was going to do this I sat down and thought about the bands I really wanted to work with and by doing that I took in to account those who’s music I genuinely liked, which personalities within those bands I could get on with on a personal level and most importantly which bands I could actually help in terms of progressing them further and opening doors which they may not currently be able to do so themselves. I made a list and began making contact. Over the past few weeks I’ve spent a lot of time sitting in pubs chatting to various groups about how we could work together – so much time that you could be forgiven for thinking I have a drink problem!

I’m very pleased to confirm that at the time of writing none of the bands I met have turned me down and at this point I can confirm two new additions to the promotions side of the business in the form of Searching Grey and Meet Me At Dawn with another hopefully to be announced in the near future.

Searching Grey are relative new kids on the block having only formed last year but have already shown signs of a promising future. I’d been following the early stages of the bands existence with interest knowing their drummer, Mike Jamieson who I have worked with before on a previous project, they played an NMG Sessions towards the back end of last year and have taken the Unsigned Chart by storm having spent 13 weeks to date in the top five. They’ve already secured BBC Introducing support via BBC Suffolk and have been working with John at Crooks Hall Studios to record some of their strongest material. The target for this band is to get their name out there so they can pick up regular gigs, make some festival appearances this summer and promote their new single release which is due out in the Spring.

Meet Me At Dawn are a band who in contrast have, at least in name, been around for several years. The fact that they have morphed through various line up changes over those years is one of the attractions to me in working with them because this shows a level of dedication and commitment where many bands before them would have called it a day. The line up these days consists of Kieran Osborne (vocals), Jake Brown (lead guitar), Max Cope-Cornell (rhythm guitar), Ross Shelley-Pilsworth (bass) and Ben Harrison (drums). The band released a very good EP a few months back but haven’t in my view exploited it enough and so that’s one of the first aims when I start working with them – push the EP out to a wider audience and give it the listeners it deserves. The band also want to gig more regularly and plan to record new material soon too.

With both of these bands, the control is in their hands. I don’t get involved with their music or tell them what to do – we work out a plan and work together to tick off the targets as we go through. This is the difference between them and the bands signed to management deals.

Speaking of which, I was delighted to announce a couple of weeks ago the addition of History & Lore who I honestly think are the most underrated band in Cambridge right now and that’s mainly because nobody has really heard of them – yet. Their sound is very current in comparison to the up and coming bands all the cool bloggers and media types are hyping, their live sound is already breath taking and they’ve barely been together a year. I saw them sound check ahead of their gig at the Cambridge Junction the other week and was left in no doubt that this is a band I want to work with. History & Lore are signed on a full management deal, I look forward to what the future holds.

So that’s 3 in the door, what about the rest?

Staycations (note they’ve ditched the ‘The’ at the beginning because it’s cool) have completed their work in the studio working with producer Matty Moon on two new tracks which are currently being mixed and then will be sent off to be mastered by Pete Maher who amongst many other legendary artists has mastered the work of U2! Following that we hope to push on with a PR campaign ahead of the release which I’m targeting to be April as it stands. Once that’s out we’ll be in to the early stages of festival season and that’s when the band will jump back in to the live scene having taken a break for the first portion of the year. We have an exciting gig in April and a promising early list of festival acceptances to announce soon so watch this space for that. The band intend on taking a gap year from studies at the end of this academic year so the intention over the coming months is to get them in to the best position possible to take advantage of that.

Bury The Light have had a turbulent few months having first lost their lead guitarist in October to be followed by his replacement and the bassist a few weeks ago. The core of the band is still together (Luigi, Sam & Charles) and have been working hard on recording demos for new material and seem determined to make some progress this year after these few set backs. A new addition to the band is imminent and hopefully from there they can start gigging again.

Finally, last but not least The Abstracts are celebrating by getting a spot in the heats of the Cambridge Band Competition this year and receiving so far positive feedback to their new single release. Festival applications are going well and another tour is being talked about for early Summer. They’ll also be on Cambridge TV soon too with their own music special and they’re heading back in to the studio to record some new material in preparation for an EP release later in the year.

Another exciting extension to the business is the launch of Spitfire Recordings. It seemed to me a sensible next step to start an independent label which can both benefit bands I’m already working with and in time others I’m not. The label will serve to distribute artists music both digitally and physically, initially in local record shops and will ‘plug’ releases to a network of radio stations across the UK. I intend to mark the launch of the label by getting together a bunch of local musicians for the collaborations album I’ve long been thinking about so if you’re reading this and fancy collaborating with another artist on a professionally recorded album then get in touch. We’ll mark the whole occasion by holding a launch party later in the year.

In other news I’m pleased to be involved in both the Cambridge Band Competition (stage managing the under 18s and over 18s heats at the Portland Arms on Saturdays in March) and judging BurySOUND alongside (as I found out today) a list of names I’m not really worthy on being on the same list with!

Festivals wise, I’ll soon be turning my attention to programming the Cambridge 105 stage at Strawberry Fair and looking forward to my second year as Artist Liaison at Homegrown Music Festival plus hopefully some involvement with stages at Cambridge Rock Festival and to bring you some positive news on a return for Alex Fest soon too.

Radio is going well with The New Music Generator airing on Wednesday nights on Cambridge 105, the monthly NMG Sessions gaining more and more popularity with every event and the fortnightly acoustic evening we run at the Architect in Cambridge. Oh, and it’ll not be long before the 2016 NMG Awards need my attention too!

So it’s shaping up to be an extremely busy but exciting and rewarding year. I can’t wait to share news with you here as it happens throughout the year.